Dear Member, March has been a challenging month with consistent rainfall, low temperatures and minimal sunlight. This presents a challenge for both bent and bermuda grasses. Below a summary of the weather data year to date, as you can see March was a wet one although last year, we had 240mm. The rainfall is very welcome given the water storage for the region being in a critical state. March has seen an increase of 13% and 22% at the two storage areas for where we receive our water from. These are still low but we are hopeful now of avoiding summer restrictions because of March’s rainfall. 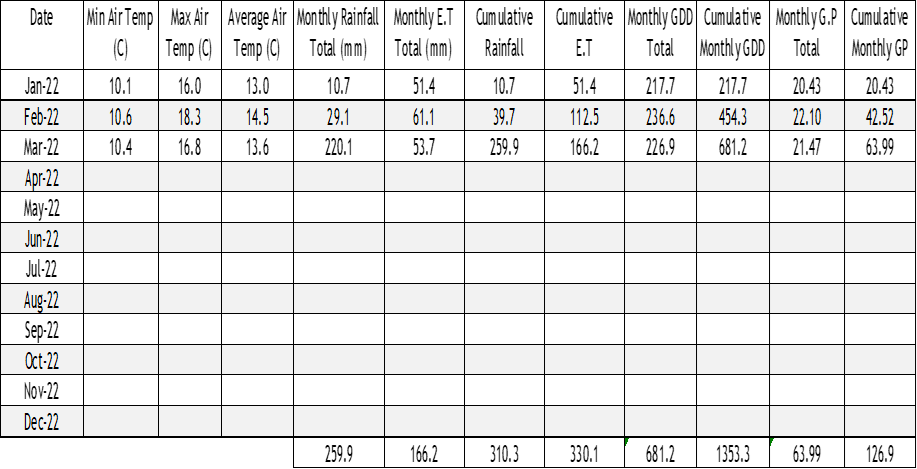 Growth potential went down in March which is not the way we want it to go! Growth potential is a formular we use to assess turf growth, nutritional inputs, weed and pest cycles. We haven’t hit optimum growth for the bentgrass since November. 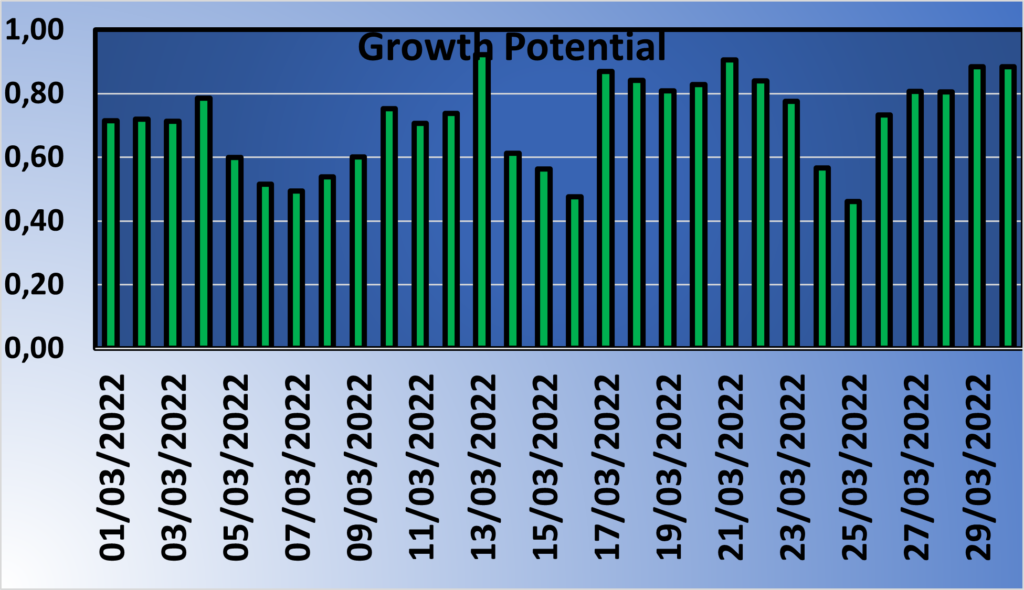 The greens performance data is trending in the right direction and this will only improve as that GP moves to optimum levels. This will allow for the bentgrass to be worked a bit harder with more rolling and some double cutting. The tees aeration works that were planned in the last week of March had to be cancelled unfortunately due to the truck strikes and us unable to get the sand delivery. We will now look to arrange another date or get a little more aggressive with them in the May closure. All the preparations are in place for this period as this will be key for the season ahead across all surfaces.

Below is a snapshot of our VWC (volumetric water content) in Greens, as you can see due to the rain levels these have steadily increased during March. The aerations we have completed in March has allowed air in which is crucially important, especially in periods of extended wetness. Some Algal spores have been seen across the surfaces. Our target range is 14-16% so being at 22-25% is less than ideal.

Picture of the aeration and topdressing works completed at the start of March, these practices are essential for maintaining the turf in a healthy condition. Regular and consistent topdressing will also start to improve the pitch mark scarring over time. The accumulation of sand will make the surface firmer which will mean less impact when the golf ball hits the surface as we dress up the canopy creating a matt layer which really helps take the impact of the balls. It is common for the surface to be a bit softer after we complete the aeration just because of the vertical disruption to the surface. The next 6-8 weeks as it warms up is the optimum time for root growth so we will vary the depth of aeration to promote rooting. 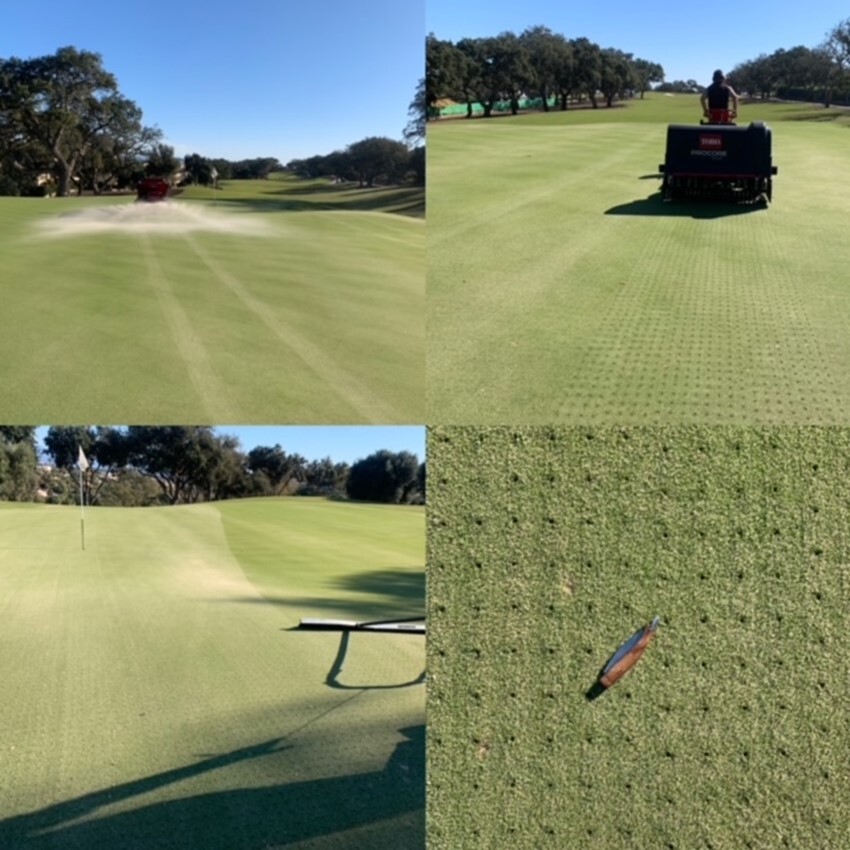 You will probably have noticed we have started to edge the interface between the bermuda and bent. The mechanics developed a guide plate to support the edging blade. This is done to prevent the grasses getting contaminated. We do have some contamination which we will have to manually remove over time but this will prevent new contamination. 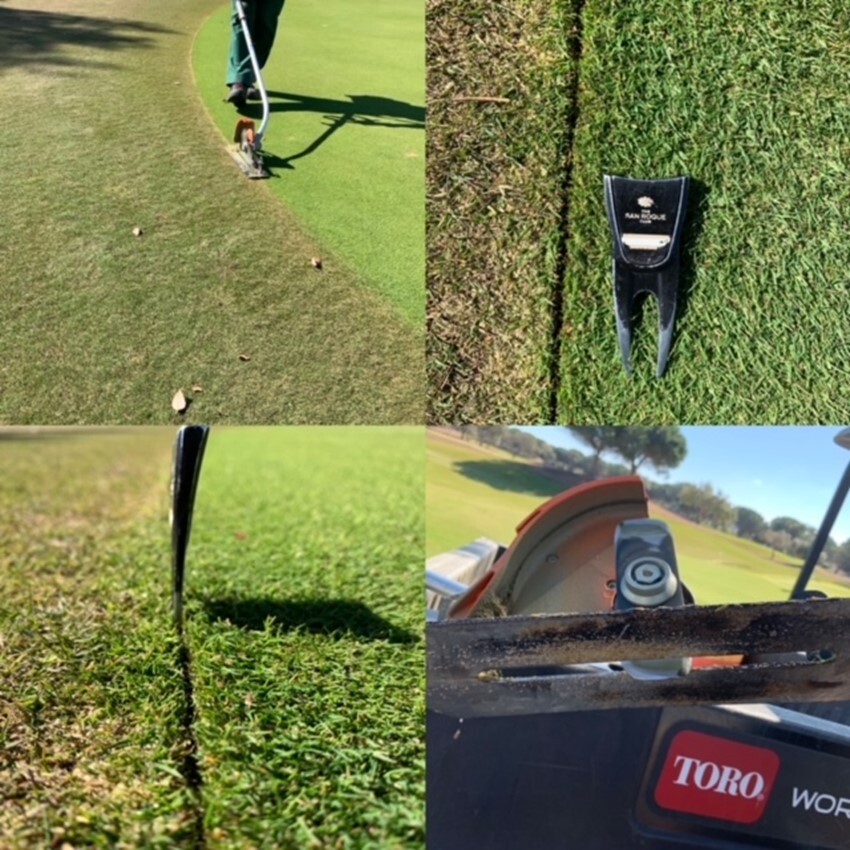 The tees going through the same process, we are using a powder coated string line to help guide the team in keeping the edges straight. 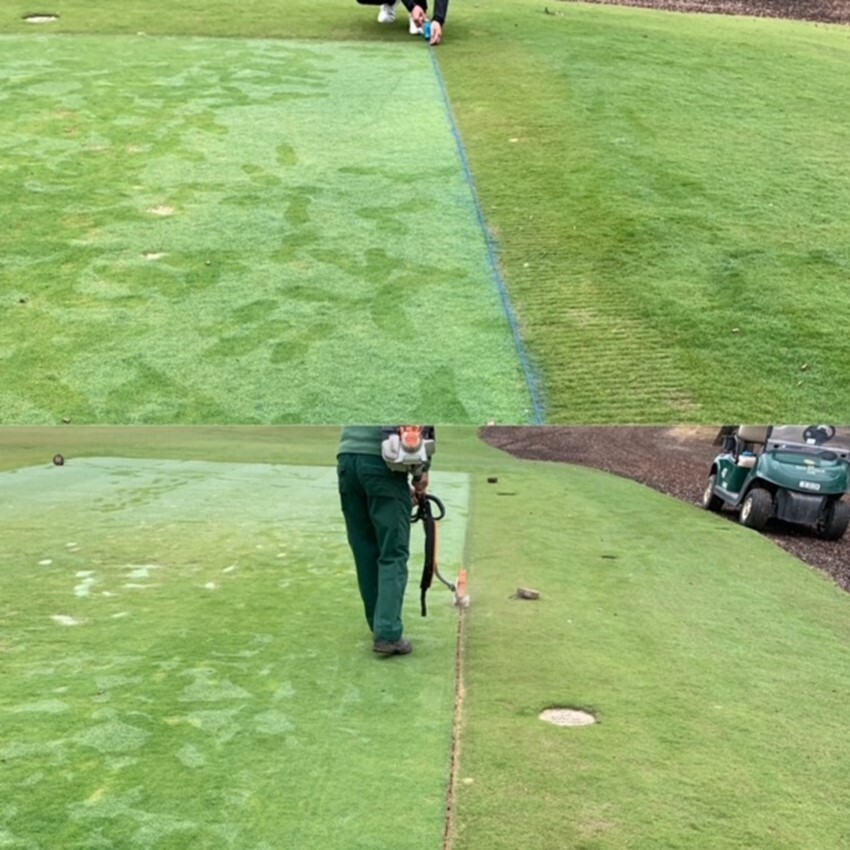 You will have noticed several areas around the edges of the Ante-greens that are being replaced. This is a combination of encroachment from the bermuda and some chemical damage from the application in Jan and Feb. The challenge we have is on many of our green’s gravity isn’t on our side and the residual from the chemical translocate down with the slopes. We had around 80% kill on the unwanted bentgrass in the bermuda which is successful. We will target isolated areas that have had any regrowth as we go through the year. We have continued to do some trials at different rates with different products to improve this situation. 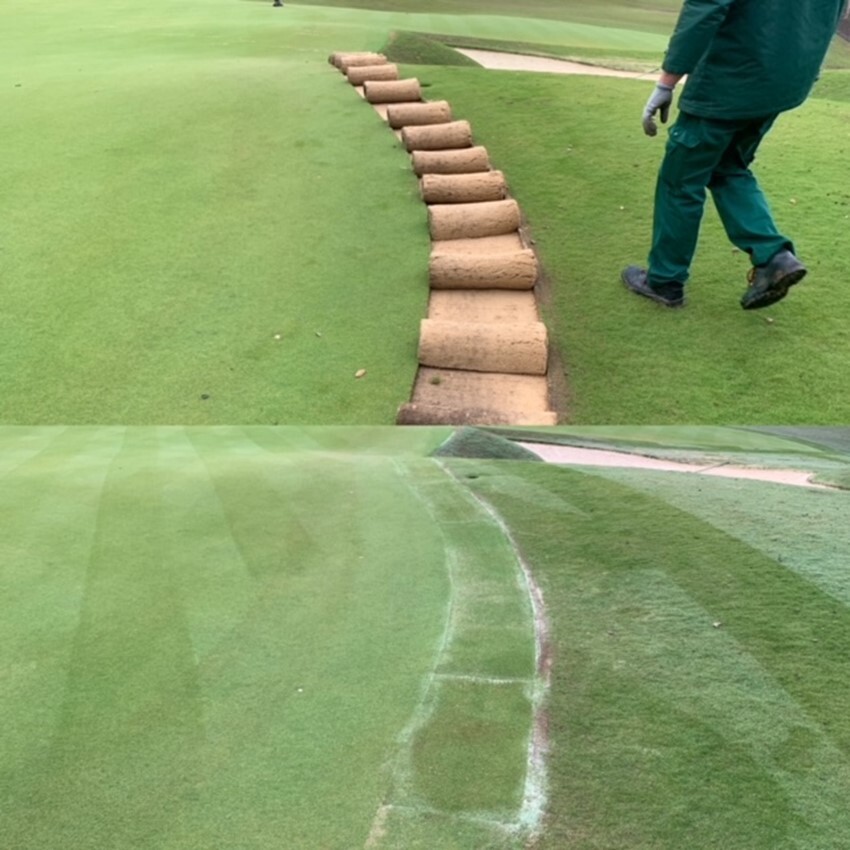 Below highlights the success of the application. We had large amounts of bentgrass left outside the bent areas from the grow in. Usually bent seed gets moved around on the machine as the seeding process is completed. Below pic highlights the kill. Left picture is after the second application at the end of Feb which shows the bent browning off. Bermuda will fill into this area as it warms up. 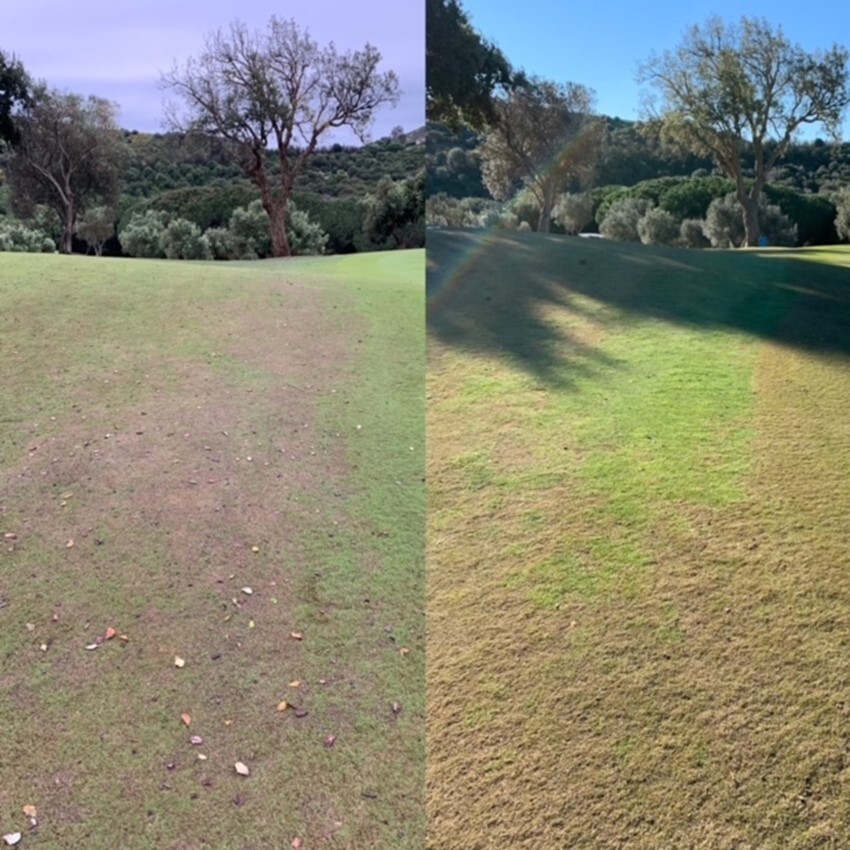 Generally, the herbicide program with pre and post emergent is working successfully, the Poa (pictured below) will always present a challenge due to its prolific seeding habit, each plant can produce anywhere between 300 – 2000 seeds and is known around the world as one of the most problematic weeds to manage on golf courses in some climates. Poa is very shallow rooting and doesn’t like the heat so it will become easier to stress out as things warm up, right now it has the perfect environment to thrive, cool and damp. Most important thing for us is to stay on top of it through a combination of pre and post emerging herbicides. A pre-emergent went out in the last week of March to try and protect us from emerging weeds as well as a post emergent which is planned for some time in mid-April. The chemical technology we have available in Spain is very old and the product availability limited. This is something I am still looking at closely for long term options for better management of these problems. 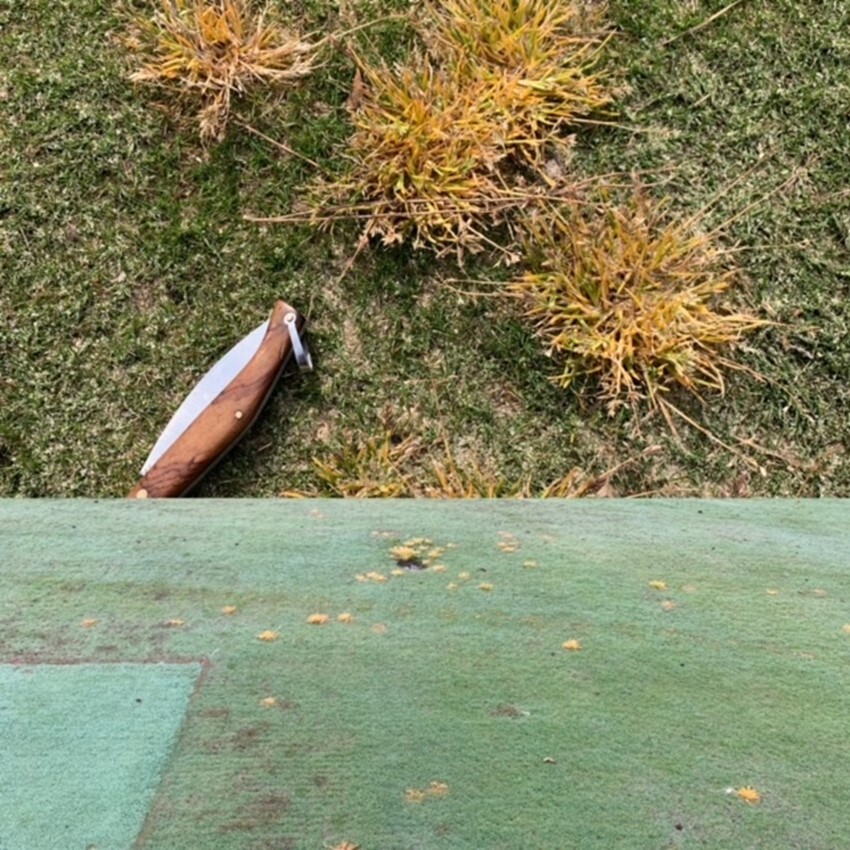 We completed some aeration on the new course greens on the 22nd of March. Even after 80mm of rain the week before this was still struggling to penetrate the unhealthy thatch layer causing the root depths to come up and turf to deteriorate and get worse. This will assist in alleviating the issue. These greens have various species of turf in them and as it warms up the overall coverage will improve. That said, they are in the condition they are through the reduced maintenance over a long period and this is done with the renovation in mind. 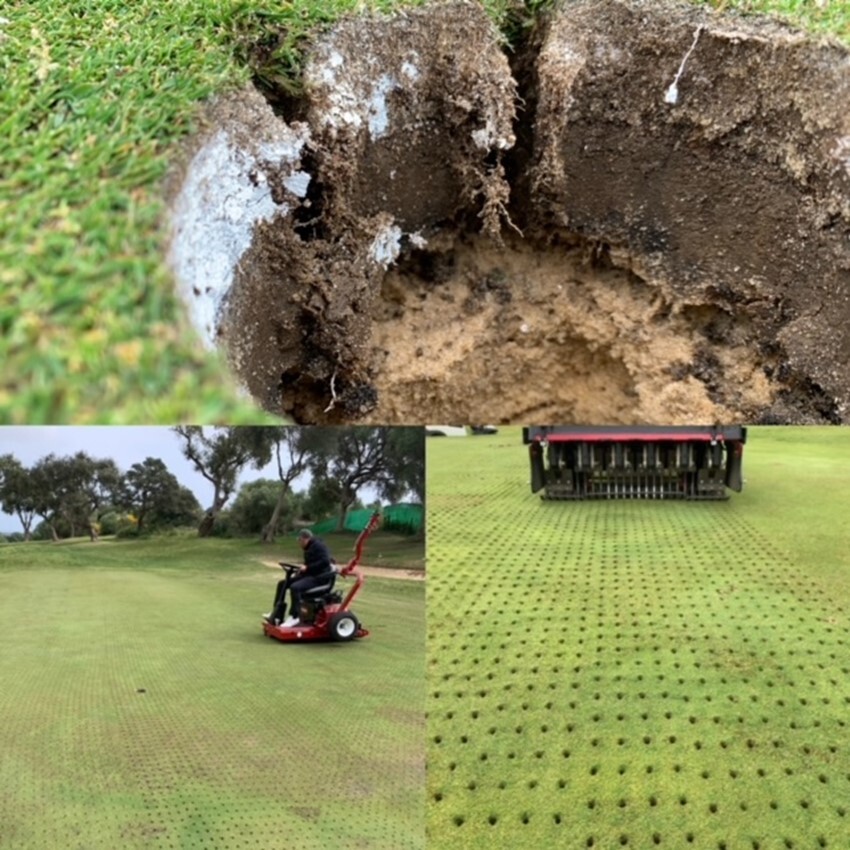 As always if there are any questions on anything then don’t hesitate to contact me or stop me when you see me out on the golf course. We look forward to some warmer weather and sunshine to really be able to start to improve the surfaces.

What are you waiting for?